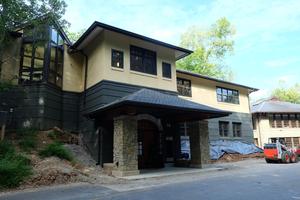 LOUISVILLE, KY (WAVE) - It’s always good to be in demand.

Requests for increased enrollment is what schools want. But a historic Louisville school had a major roadblock; they couldn’t allow more students because they had no property to expand into. So much like the students there, school leaders had to think out of the box to get nestled in nature along the Ohio River.

At first glance Virginia Chance looks like a treehouse, but the school that sits on a hill has a unique Louisville history few know about.

“The world kind of changed right here on the cusp of the bluff,” Louisville historian Tom Owen said.

That spot on the cusp of the bluff is where a commuter railroad line began in Louisville’s Glenview in the 1870s. Its stop at the base of that bluff was known as Florida Heights.

The rail line served the industry and families whose children attended four, one-room school houses from Zorn Avenue to Prospect. Parents, both tenant farmers and wealthy neighbors, came up with an idea.

“They proposed that the Jefferson County School System, a rural school system at that time, develop a model, consolidated school," Owen said.

To build the school, the parents needed Louisville flour mill mogul, Lieutenant Governor and school neighbor, S. Thruston Ballard, to donate the land. He agreed on one condition - if his young son who died was honored.

“They only asked that the school be named Rogers Clark Ballard School,” Owen said.

The Ballard School opened in 1914 on Lime Kiln Lane, where a real Lime Kiln operated. In 1958, the county wanted to move to a new, one-level school building down the street. The move initiated the formation of Ballard High School.

In 1961, kindergarten teacher Virginia Chance took over the space by opening a private school that eventually became a Louisville pioneer in progressive learning.

“It’s an addition to our school which is really exciting and it has an elevator," student Lilly Paradis said of the changes.

The renovations didn’t come easy. Much of the 26 acre property, like the school parking lot, has been borrowed from neighbors. The sports field is in a flood plain.

“We had to figure out how to tuck it in on what really is a postage stamp size piece of property,” Bill Receveur, head of the Chance Building Committee, recalled.

The only option was to dig out the hillside. When crews reached the historic Lime Kiln quarry they ran into solid rock. With school in session, the removal required work at all hours, geo-technical experts and a lot of creativity.

“The back wall of the building is really a retaining wall," Receveur said.

The National Park Service, the agency which oversees renovations for the National Register, was impressed by the plans sent as a courtesy by the school. So were the Virginia Chance families.

“It takes a willing heart and an understanding,” Receveur added. "Oh, and a bit of a sense of humor!”